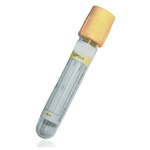 The primary functions of Vitamin B12 are in the formation of red blood cells and the maintenance of a healthy nervous system. B12 is necessary for the rapid synthesis of DNA during cell division. This is especially important in tissues where cells are dividing rapidly, particularly the bone marrow tissues responsible for red blood cell formation.

If B12 deficiency occurs, DNA production is disrupted and abnormal cells called megaloblasts occur. This results in anaemia. Symptoms include excessive tiredness, breathlessness, listlessness, pallor, and poor resistance to infection. Other symptoms can include a smooth, sore tongue and menstrual disorders.

Anaemia may also be due to folic acid deficiency, folic acid also being necessary for DNA synthesis.

B12 is also important in maintaining the nervous system. Nerves are surrounded by an insulating fatty sheath comprised of a complex protein called myelin. B12 plays a vital role in the metabolism of fatty acids essential for the maintenance of myelin. Prolonged B12 deficiency can lead to nerve degeneration and irreversible neurological damage.

When deficiency occurs, it is more commonly linked to a failure to effectively absorb B12 from the intestine rather than a dietary deficiency. Absorption of B12 requires the secretion from the cells lining the stomach of a glycoprotein, known as intrinsic factor. The B12-intrinsic factor complex is then absorbed in the ileum (part of the small intestine) in the presence of calcium. Certain people are unable to produce intrinsic factor and the subsequent pernicious anaemia is treated with injections of B12.

Vitamin B12 is excreted in the bile and is effectively reabsorbed. This is known as enterohepatic circulation. The amount of B12 excreted in the bile can vary from 1 to 10ug (micrograms) a day. People on diets low in B12, including vegans and some vegetarians, may be obtaining more B12 from reabsorption than from dietary sources. Reabsorption is the reason it can take over 20 years for deficiency disease to develop in people changing to diets absent in B12. In comparison, if B12 deficiency is due to a failure in absorption it can take only 3 years for deficiency disease to occur.

Samples should be clot-free and free of red cells or other particulate matter. The presence of fibrin may cause erroneous result.